Eruption at the crater northeast of Etna 9 September 2019

New eruption of Etna! It was days that many people were waiting for this new eruptive phase. After the volcanic tremor has increased over the last 24 hours, the magma has managed to find a way out again. Late in the evening, volcanic lava came out from the northeastern crater.

September 09, 2019: The INGV Catania (National Institute of Geology and Volcanology) reports that strombolian activity in the northeastern crater persists, which produces diluted ash that disperses into the atmosphere near the summit. The amplitude of the volcanic tremor remains at a high level, moreover, it should be noted that from 8.50am, it recorded a new increase compared to yesterday.

The location of the sources of the Etna volcanic tremor

It's located in the northeast crater at an altitude of about 3000 m. The sources of infrasonic signals continue to be located in the same crater. The clinometric network of Etna shows modest observable changes, notably at the  stations of "Punta Lucia" and "Pizzi Deneri". In addition, the tilt signal has a noise, typically associated with high tremor phases.

The GPS network does not show substantial variations. The flow of SO2 measured through the FLAME network indicated at 3.25pm a daily average value of 4800 t / g, which placed the degassing at an average level and below the attention threshold of 5000 t / g. In detail, the intraday data showed great variability with flow transients reaching max. of up to 11650 t / g, attesting to the high level of degassing.

Michele Mammino immortalized the eruption, what a beautiful sight!

This big enthusiast of the volcano is often at the forefront when Etna is at work. Challenging sometimes difficult climatic conditions and obvious volcanic dangers, his videos and photos are very beautiful and interesting also for the understanding of volcanic phenomena, thanks Michele.

The eruption of Etna in 1911 began between the 9th and 10th September 1911 and suddenly ended on the 22nd of September, after the destruction of forests and vineyards and the interruption of the Circumetnea railway in the region of Solicchiata. This was the cause of the birth of the northeast crater. The eruption was preceded by a series of open fractures on May 27, 1911 on the north-east flank of the volcano's central crater, at an altitude of 3000 m. and up to about 2300 m, followed by the collapse of much of it over a hundred meters and the opening of a series of slits between 2550 and 2000 m towards Mount Nero.

The following weeks show only weak volcanic activity from the new mouth, with white and dry smoke output and emission of sulphurous vapors. In August, from the central crater and the new mouth, there was some Strombolian activity until midnight between the 9th and 10th September, when a strong and explosive seismic activity was triggered with the launch. lava and incandescent materials and the formation of the classic "volcanic pine" which reached a height of about two thousand meters. At the same time, the previous cracks have lengthened to reach the Linguaglossa pine forest with the release of fluid magma.

Beginning on September 12th, a series of buttonhole mouths erupted southeast of Monte Nero, from which a large stream of lava flowed following the course of the 1646 eruption. Another eruption at north-east of the same mountain with another great lava flow which, on the evening of the 12th, had reached the departmental road for Randazzo and the railroad. The lava emission of the different slits reached its highest intensity on the afternoon of September 15th.

On September 19th, the west stream had already destroyed vines and bastides in the "Imboschimento Valley" and covered, about a height of 30m, about 800m of the Circumetnea railway line in the region of Solicchiata. The other flows had widened, slowing the race. The lava continued for over 2 km beyond the railway line.

On September 22, after 13 days of traveling about 7.5 km, during which the new Northeast crater was born, the lava stopped before becoming a threat to the Alcantara River. Throughout the period, but especially between the 11th and 16th September, the central crater had emitted enormous quantities of ash that had caused damage and respiratory distress to Catania. The railway line was then rebuilt. 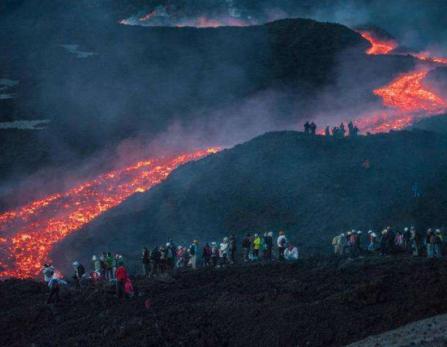 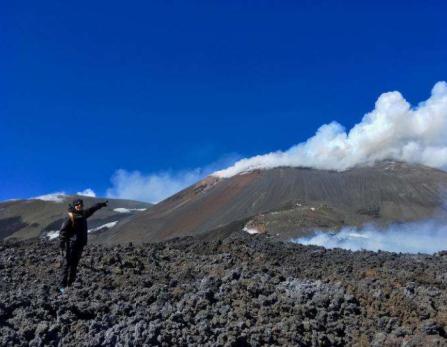